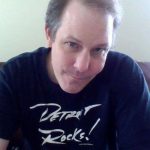 Tom McDonough officially started his music career in the 90s playing for a few bands on Tour. He works in music production and as record label exec since 2000. He also started building the WROM Radio Detroit network in from the ground up in late 2005. As a native of the Detroit area, Tom has always held music hailing for the motor city in high regard. Although, a sudden and steep introduction to the music world during the late 1990’s is what opened Tom’s eyes to the vast possibilities of radio, ultimately leading him to explore and thrive in the internet radio market. It is Tom’s well sought after discernment along with his unique insight that has helped him craft WROM into the media powerhouse that it is was. He has done several radio shows and podcasts. He has worked with MI5 Recordings and Universal Music Group for 17 years and been in the music and entertainment industry 28 years.